Sand Island – also known as Gödi Island – is located on the left bank of the Vác branch of the river Danube, and is part of the Danube-Ipoly National Park. Its length depends on the current water level, but is about 1,000 metres, while its width never exceeds 100 metres. It is separated from the shore by a tributary called the Little Danube by the local people. During high tide the island is completely covered, while at very low tide the tributary almost completely dries up.

It covers an area of approximately 10 hectares, but this is gradually increasing due to river dredging and two spurs.

During the river dredging which started in the 1880s and accelerated after the Second World War, Sand Island was connected to the shore by a cross barrier. The aim was to keep as much water as possible in the main branch during low-water periods. At the time, the height of the dam’s crest was 250 centimetres at the Vác water level. In addition, two spurs were built on the island to hold the drift line against the groove, which was protected from erosion by a parallelogram. This, however, further narrowed the bed: its current width is 350-400 metres. 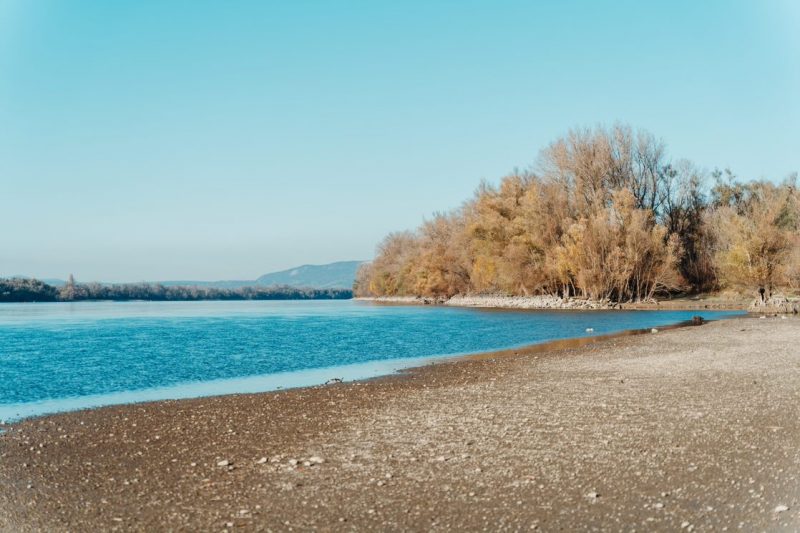 As a result dredging, the water velocity on the Göd side decreased and the area of the island increased rapidly from the sediment that was being deposited, and the width of the tributary was reduced by a third due to the reefs that formed in the bed. Sandbanks cut off the tributary from the main branch to the north and south.

The average water level was steadily falling, and the reefs were drying up, first with bushes and then with trees. This period of vigorous growth lasted until about the 1970s, when a gap opened in the ice-damaged barrier linking the island to the coast. As a result, water flow in the estuary was observed at much lower water levels. In the southern part of the island, the flowing water cut through the forested reef in two places. Steep banks and overhanging trees mark the increased erosion. The sand washed away by the current has given rise to the popular sand island bathing area.

Nowadays, it is no longer the crown level of the dam that determines the flow of the tributary, but the gravel reef deposited at the northern end of Sand Island. On the main branch side, a reef, mainly of gravel, has formed between the two spurs. (As a result of dredging the area of Sand Island has almost tripled in the last 60 years.)

Most of the vegetation is softwood forest, typically white willow. The island and its immediate surroundings provide a diverse habitat for birds, with ornithologists describing over forty species of resident and over sixty species of migratory birds.

Sand Island, which coincides with the Danube bank in Göd for most of the year, is a popular recreational and hiking destination for local residents.